From HighwayWiki
(Redirected from Essco)
Jump to: navigation, search

A subsidiary of the Gamewell Corporation of New York who later merged with Harrington-Seaberg and eventually became Eagle Signals Corp.

Eagle Signals was one of the largest and most successful signal manufacturers and continue to do business to this day. Subsequently there is a great deal of history and information to be processed for them. I will post information to this section piecemeal and eventually clean it up and format it at a later date. --Ed T. 14:33, 29 April 2008 (EDT)

From a post on SignalTraffic.com forums by user 'Fully Actuated':

I have seen historical ads that read "Essco of Peoria, IL...a Harrington-Seaberg Company of Newton, MA" That is a part of their history which is still cloudy for me. However it is apparent that Essco and Harrington-Seaberg were for a period of time operating under one umbrella. Harrington was a fire alarm equipment manufacturer before it allied with Seaberg. (I collect fire alarm boxes too.) Another curiousity is that Newton, MA was the home of Gamewell, another fire alarm equipment manufacturer. Trying to determine the exact chronology of who owned who and when has been a challenge.

An important consideration in the challenge to determine chronology of ownership is that this was during the Depression and Post-Depression era of the late 20's early 30's. Lots of companies were going broke and folding and others were merging to stay alive. This was also the era of corporate monopolies where there was very lax enforcement of anti-trust laws. A few companies "covertly" owned other companies as fronts to edge out competition. (ADT and Gamewell eventually were busted by the feds for anti-trust violations.)

broken down into general categories [delete]

Figure: One method of mounting a signal with ornamental bracketry. [Image by LC]

The mushroom light was an early style traffic signal and speed hump all in one. They were installed in the pavement and resembled a convex sewer grate. Typically they were illuminated red and did not flash. They could be installed in the center of an intersection, or at the entry point of all streets in an intersection. They provided guidance for cars to move through an intersection delivering a sharp bump to any vehicle straying too far or fast from their lane. 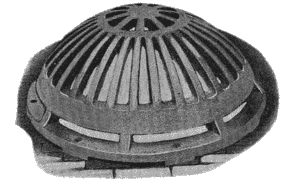 Figure: Electrical installation sketch of a mushroom on a cobblestone street with a concrete or asphault base. [Image by LC]

this would include any kind of mounting hardware including brackets, slipfitters, hangers, bases, etc. [delete]